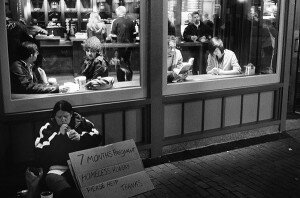 Pregnancy is a very special state for a woman, one which requires complex and specialist care to assure the well–being of both, the mother and the unborn child. Pregnancy is also a time to share and be cheerful with family and friends. However, not every woman can enjoy such a protective support and some of them are exposed to very unstable situations.

A pregnant asylum seeker under the support of sections 4, 95 or 98 of the Immigration and Asylum Act 1999 will be offered accommodation and financial support but she won’t be exempt from UKBA dispersal policies, meaning that she could be relocated anywhere in the UK as many times as the UKBA considers it necessary. Following the new guidance on pregnancy and dispersal established in July 2012 by the UKBA a “protected period” of four weeks before and after the birth was introduced. During this period a pregnant woman cannot be dispersed.

Yet a 2013 report by the Refugee Council and Maternity Action, When maternity doesn’t matter: Dispersing pregnant women seeking asylum*, points out that the guidance does not take into account pregnant women’s mental well-being and health needs. The report highlights the risks to which this vulnerable group is being exposed. It is the result of exhaustive interviews with twenty women who have been dispersed during their preganancy.

The report shows that sometimes women have had serious health conditions such as HIV and diabetes or other factors such as depression and high levels of stress that put them at risk during pregnancy; frequently when women are relocated they are separated from family, friends, and healthcare arrangements and they are thusforced to give birth alone. In some cases women were dispersed against medical advice and journeys caused additional health and psychological problems; sometimes they were moved several times and accommodation was unsuitable because of lack of space, hygiene, inadequate food and overcrowded spaces. Moreover, interviewees found that they had insufficient money for essential needs such as clothes or food for their new born.

Dana, one of the interviewed women said “It was freezing (December 29th) but if I didn’t go I would lose my money. For £35 I left my baby. Two hours after I gave birth I left the hospital to go to the post office. The nurses said, ‘No you are not allowed to take the baby with you because you are not fine.’ I said, ‘No I have to go because she doesn’t have clothes. I have to buy clothes.’ So when she was born for two hours she didn’t have any clothes so they covered her with towels.”

The report concluded with a series of recommendations aiming to improve the conditions of pregnant asylum seekers, raising awareness about their care needs especially when they have been exposed to traumatic and violent situations in the past.